Mathematics is often described as a universal language, completely separate from the seemingly endless interpretations of different dialects. While it is true that in the way that they are written down, numbers often don’t vary between languages, actually saying them aloud is another matter entirely. In fact, the way numbers are said in different languages often reflects a completely different way of interpreting them.

Any English speaker who has learned even basic French will testify that learning numbers is a nightmare. Multiples of ten are simple up until soixante, which is sixty. But then: you have to start doing sums. Seventy is soixante-dix , which translates literally to sixty-ten. You can venture a guess for eighty; it must be sixty-twenty right? Wrong. In fact it is quatre-vingt meaning four-twenty. So now we were doing multiplication? By ninety we’re back to addition: quatre-vingt-dix: four-twenty-ten. The reason is that  French uses base twenty for its counting system, something that English used to, too (if you’ve ever heard ‘four-score and seven’ in a historical film, then they meant eighty-seven).

Many miles away from France, a similar counting method was established in Mexico among the Tzotzil-speaking Mayans. Their language refers to an individual’s ten fingers and then ten toes. When these run out, the speaker simply refers to the digits of the person standing next to them. So: if they were to read out the number 37, they would say vuk lajuneb xcha’-vinik, a rough translation of which would be ‘the seventh toe of the second man’. An even more complex way of utilizing body parts to count is seen in Oksapmin, a language from New Guinea, which uses a base-27 system. Although it doesn’t seem entirely logical to an English speaker who has never counted anything in multiples of twenty-seven (or indeed anyone who is used to the now ubiquitous mathematical method of using multiples of ten), it reveals an entirely new way of approaching counting. The Oksapmin count using not just fingers, but also seventeen other parts of the arms, neck and head, which they follow along a path from the right thumb to the left pinky. So: one is tip^na (thumb), six is dopa (wrist), and sixteen is tan-nata (ear on the other side). You can try that one next time you’re counting sheep to get to sleep; or perhaps it would be confusing enough to keep you awake for even longer. 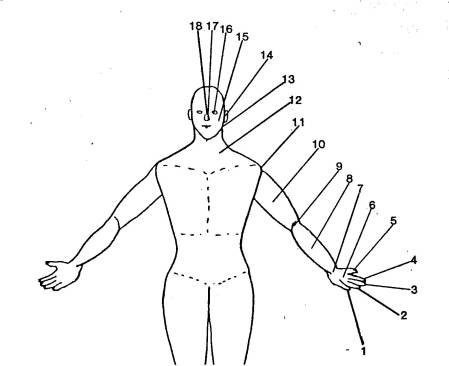 Danish, like French, requires some sums. Apparently a constant source of amusement for Swedes and Norwegians, Danish requires a solid understanding of fractions to comprehend its larger numbers. It is fairly easy until forty, using simple multiples of ten. It does, however, put its smaller units first, so forty-two is said as two-forty, toogfyrre (this is not to be confused with two forties which would be eighty). Once that simple rule is understood, we can move on to bigger numbers, which much like French, are based entirely on twenty. So: fifty is 2.5×20, halvtredsindstyve (now shortened to halvtreds); sixty is roughly 3×20; seventy is 3.5×20 and so on.

Numbers may seem like a fairly innocuous part of language, and indeed when written down they often appear to be the only familiar parts in a sea of otherwise unrecognizable characters or words. However, when it comes to reading out these numbers, or understanding the way that different cultures view counting, putting them through a standard machine translator will only get you so far. It takes someone with a real understanding of the language to tell you whether ‘99’ should be said as quatre-vingt-dix-neuf; balun lajuneb svo’-vinik (ninth toe of the fifth man); or nioghalvfems (nine plus four and a half times twenty).